The world’s first industrial robot simulation in the cloud

With the new, free robot simulation from drag&bot, the planning of automation solutions for factories becomes much easier. CAD models of the cell and gripper can be used to estimate the feasibility, accessibility and cycle time of the application within minutes.

With “drag&bot SIMULATION”, the Stuttgart company drag and bot has created the first purely cloud-based simulation environment for industrial robots. In the user-friendly web application, various robots with their own CAD models of the robot cell, as well as the objects for handling and specific grippers, can be combined in a 3D environment to form a complete working environment. The result is a “digital twin” of the robot application, which can be easily programmed using the drag-and-drop principle. With the help of drag&bot SIMULATION, manufacturing companies can now evaluate new automation solutions significantly faster and free of charge.

After the free registration the user receives his access data for the simulation by mail. Comprehensible online tutorials are available for the first steps, so that no specific robot know-how or extensive training is necessary to get started. With just a few clicks, complete robot programs including special functions such as error handling can be put together from various function blocks. Own CAD environments can be easily uploaded and used in the simulation. Each program can be tested with different robot brands and models with regard to reachability and cycle time, and thus the appropriate hardware can be determined. Finished robot programs are then available for download and can be used directly with the PRODUCTION version of drag&bot on the real robot.

After the evaluation with “drag&bot SIMULATION”, manufacturing companies can use the corresponding software “drag&bot PRODUCTION” to independently implement their robot cell with internal resources. Through plug&play interfaces to the hardware such as grippers, force/torque sensors, cameras, vision-, feeder- and PLC systems and many more, the integration can be achieved in just a few minutes – even without IT knowledge. For the program structure, the existing program from drag&bot SIMULATION can be used. Real waypoints and paths are taught to the robot via the robot’s teach panel, the intuitive drag&bot teach pendant or, for example, a 6D mouse. After commissioning, workers and production staff can see the most important KPIs of the machine with the help of the customizable cockpit panel and interact directly and flexibly with the robot in case of changeover or errors. Due to the flexibility and fast return on investment associated with this, more and more factories are turning to independent automation with robots.

Already in use in many different industries

Almost all common robot applications can be realized more flexibly than before with drag&bot. The software is now compatible with robots from all common manufacturers in Europe, including recently the robots from Epson, Yaskawa and Stäubli. In addition to the automotive and plant engineering industries, industries such as metal processing and electronics manufacturing are increasingly relying on drag&bot.

Further information can be found at: https://www.dragandbot.com/get-started/cloud-robot-simulation-signup/ 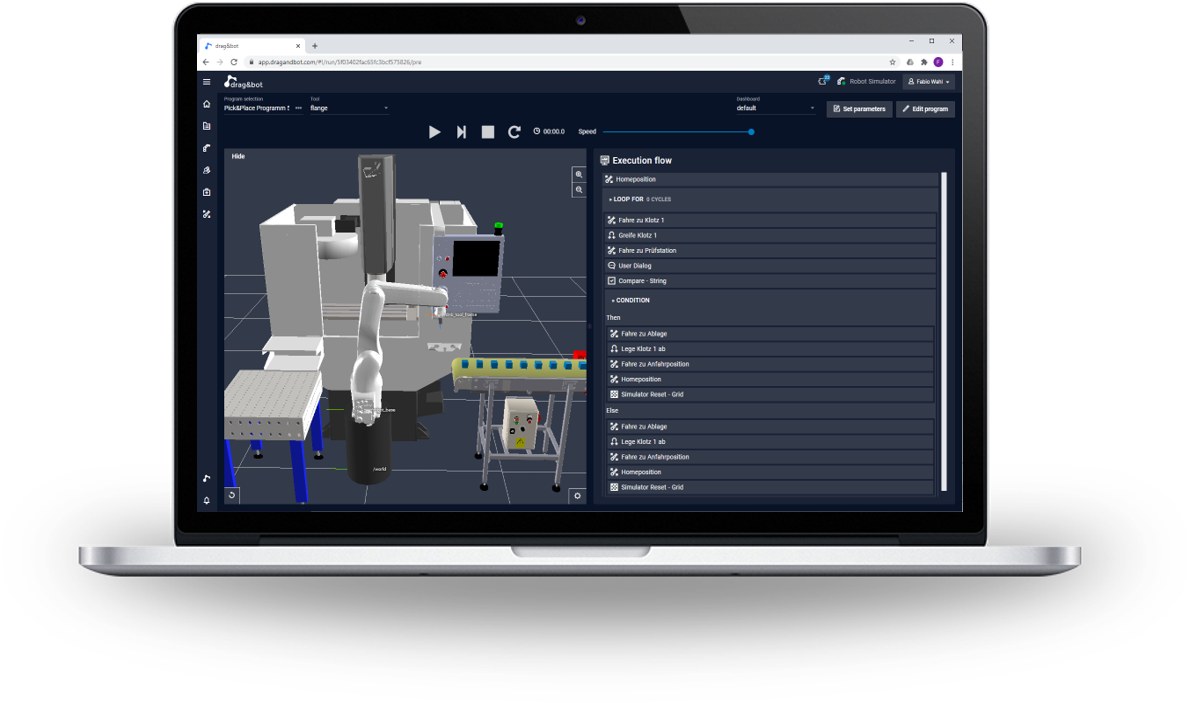