Skip to content
Start-up EXIT: Sale of drag&bot to KEBA

drag and bot GmbH becomes part of KEBA Industrial Automation from Linz! Joining forces with an international, strategic partner like KEBA marks a milestone in the history of drag&bot and creates significant synergies for both partners for the future.

drag and bot GmbH was founded in 2017 as a spin-off of the Fraunhofer Institute for Manufacturing Engineering and Automation (IPA), Stuttgart by Martin Naumann, Witalij Siebert, Pablo Quilez and Daniel Seebauer. With the help of the entire team and based on our years of expertise, the start-up has developed “drag&bot OS”, one of the world’s leading, manufacturer-independent operating systems for industrial robots. drag&bot OS works for various applications such as machine loading/unloading or assembly and is currently used in particular by manufacturing SMEs for flexible, autonomous automation with industrial robots.

For faster, global sales and further development of our products and services, a close strategic partnership with one of the industry leaders from the automation industry with international distribution now makes sense. Therefore, the founders and investors of drag&bot have decided to sell their shares in drag&bot to KEBA Industrial Automation from Linz.

KEBA Industrial Automation is one of the leading solution providers for automation technology in the field of mechanical and plant engineering. The current product portfolio of KEBA Industrial Automation ranges from motors, drives, controllers and operating devices to innovative complete automation solutions for machines and plants in various industries. After the integration of drag&bot OS into KEBA’s modular Kemro X system, even more powerful and comprehensive control solutions and modern, hybrid operating concepts for machines and systems will be possible in the future.

The acquisition of drag&bot further complements KEBA’s robotics expertise and expands its presence in southern Germany. drag and bot GmbH will continue to exist as a 100% holding under its current name as a subsidiary of KEBA Industrial Automation. This means that existing business relationships will also remain unchanged. As before, the management will be carried out by Martin Naumann and Daniel Seebauer, now extended by Christian Gabriel from KEBA. 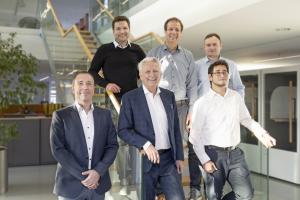