At drag and bot we work daily on making the programming of industrial robots as simple and intuitive as possible. In this way we support our customers in the flexible and cost-efficient automation of their processes. 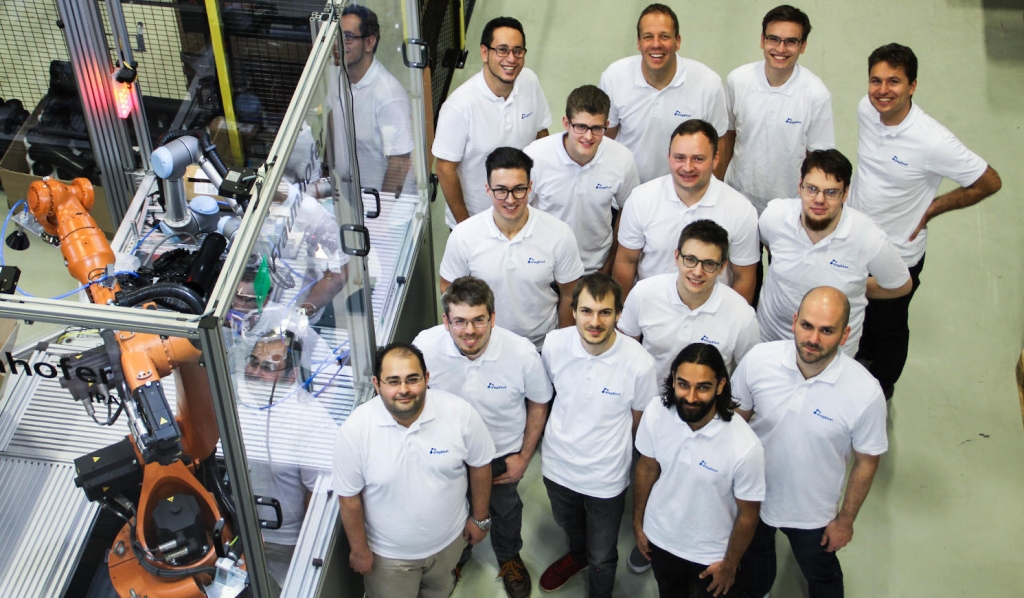 Our international team is constantly developing drag&bot to meet the high demands of our customers.
We act according to the following values:

We do EVERYTHING to ensure that our customers are satisfied with our services and products. We actively ask for feedback. Positive feedback from our customers defines our success.

We encourage and demand a high level of motivation. With us, everyone should help out and get started on their own (“hands-on mentality”).

New ideas are important to us. If we decide to tackle new ideas, we offer the necessary freedom and support to implement them. Possible mistakes are allowed and tolerated.

For us, the team is more important than each individual. We work together, party together, help each other and have fun at work.

We work independently and are responsible for the successful and timely implementation of our tasks. Barriers and challenges encourage us.

Our products and services meet the highest industry standards. Through our quality assurance and tests we ensure that our products are free of errors.

As a research assistant of Fraunhofer IPA, Martin Naumann works on new possibilities for control and interaction with industrial robots. Early on he was inspired by the idea of an intuitive, graphical user interface for controlling robots.

Despite the restrained feedback at the beginning, Martin continues to push the idea of drag&bot in research projects.

After the topic of flexible automation became more and more relevant in Germany and Europe, Martin Naumann and Pablo Quilez present the first demonstrator of drag&bot at the Motek fair in Stuttgart.

Now the market is ready: The interest in drag&bot is so great that Martin and three other colleagues decide to found a spin-off from Fraunhofer IPA. The founding team also consists of Pablo Quilez, a former research assistant at Fraunhofer IPA, Daniel Seebauer, who previously worked at Siemens, and Saskia Tobias, who was also researching the operation of industrial robots at Fraunhofer IPA.

In March 2017, the German government’s “EXIST Research Transfer” scholarship starts, giving the 4 founders the opportunity to work on the spin-off of drag and bot.

At the same time, the team of founders also changes: Witalij Siebert, who had already written his master’s thesis in the field of mechatronics at drag and bot, joins the spin-off.

First own booth at a trade fair 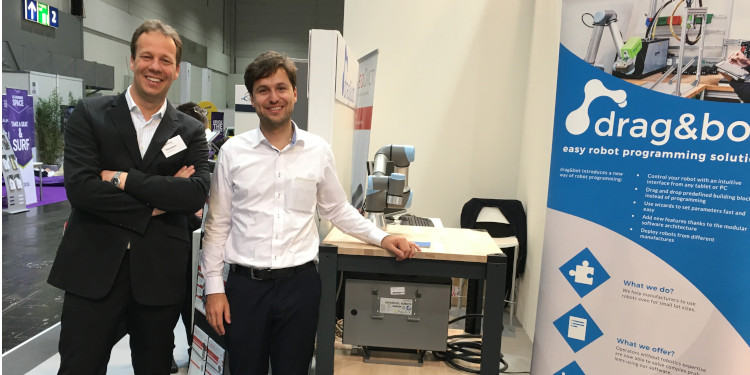 At HANNOVER FAIR 2017, drag and bot was present with it’s own small booth. Both there and in day-to-day business, factories are increasingly interested in the flexible robot programming of drag&bot.

Release of the 3D vision module

With the BIN PICKING module unsorted parts can be picked from boxes . For this purpose 3D cameras are positioned above the crate. The CAD model of the crate and the parts is stored in the software.

Release of the 2D-Vision module

The 2D-Vision module is released. It provides a hand/eye calibration for 2D cameras and enables image processing in OpenCV.

In a further financing round, led by the Austrian VC “Speedinvest“, drag and bot receives a seven-digit investment. Our goal is to be the most widespread programming platform for industrial robots worldwide by 2025.

drag and bot reaches the finals of the ABB Innovation challenge and was invited to pitch at the ABB robotics headquarter in Zurich together with ABB’s CEO of Robotics, Per Vegard Nerseth 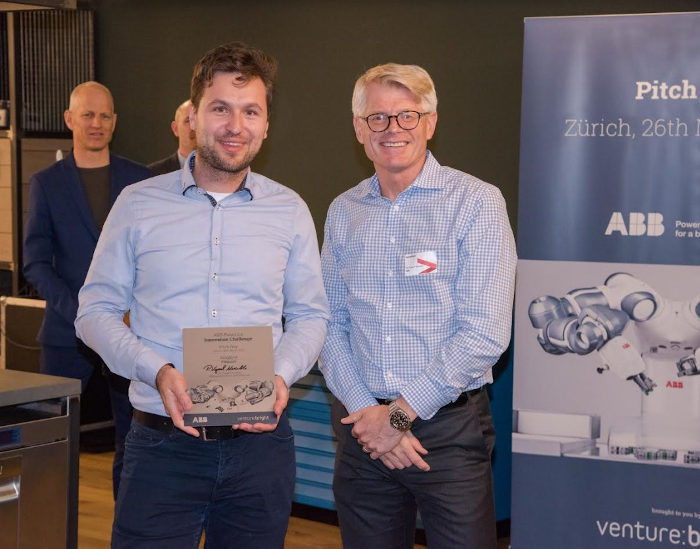 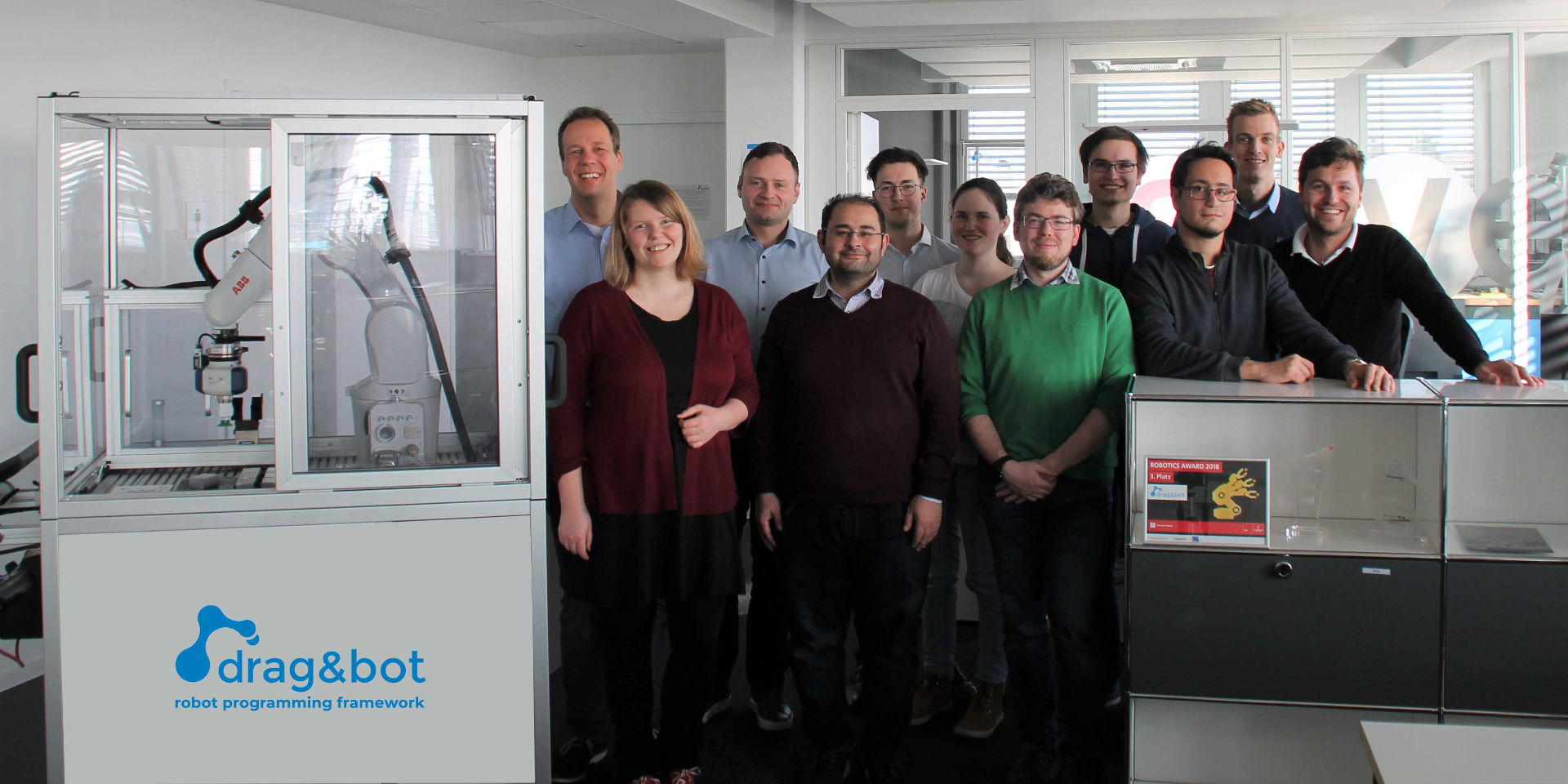 On 01.07.2019 the drag and bot team moves into the first independent office space in the design offices in Stuttgart’s Fasanenhof. The company now has 10 permanent employees.

Release of the PLC module 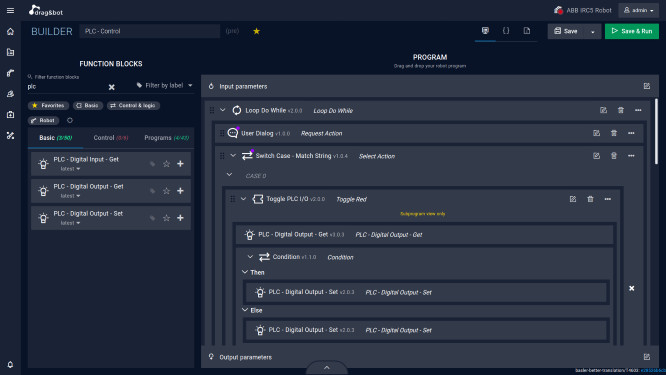 Integration of all common robot manufacturers

All common robot manufacturers as well as a variety of grippers and vision systems are now supported by the software. You can find an overview on our hardware pages. 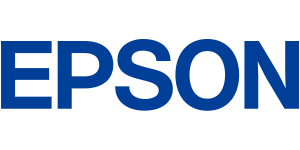 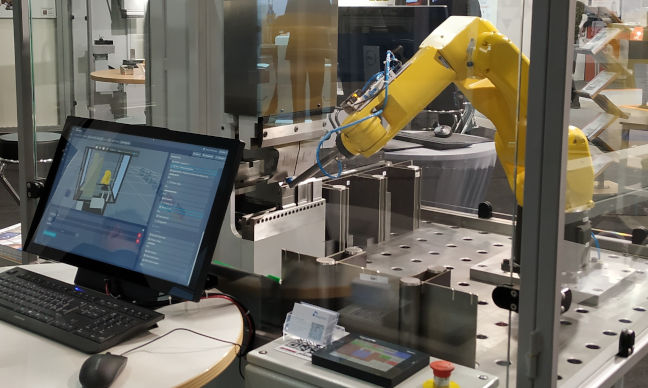 With the new drag&bot SIMULATION, manufacturing companies can now plan their automation solutions free of charge. Users can choose from a variety of robot models and also use their own CAD models of grippers and robot cells. 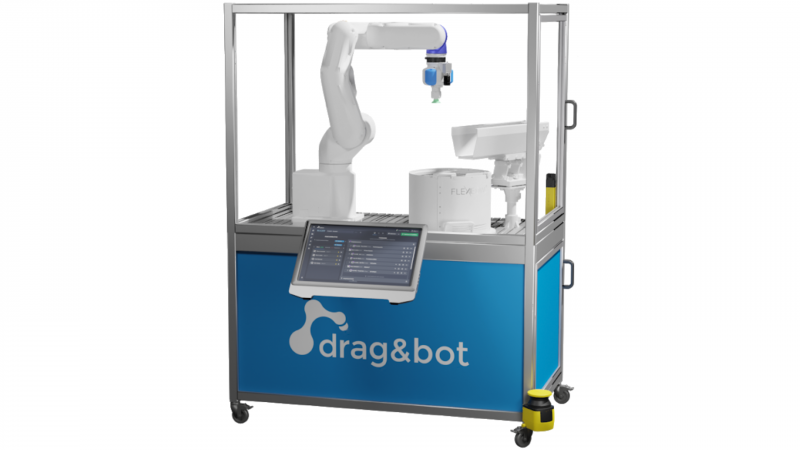 The drag&bot software forms the basis of the Robot-Kit. It is an automation toolbox from which manufacturing companies can configure a robot cell for their application. 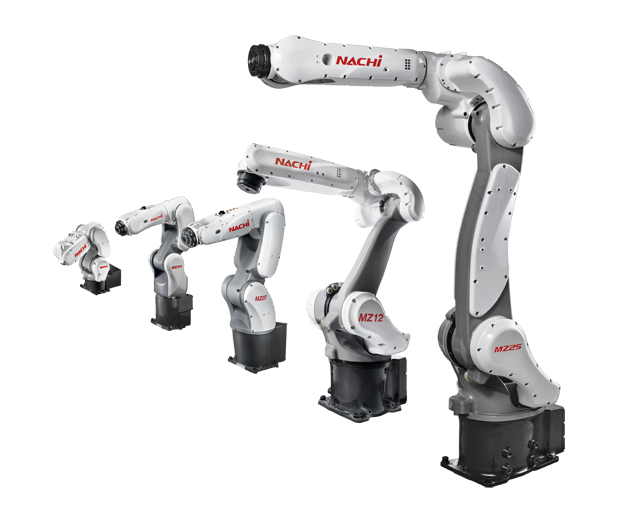 We now support all Nachi robots of the MZ series. The MZ series (1kg – 25kg) is a comprehensive range of universal, flexible industrial robots with an impressive price-performance ratio. They feature a compact and slim design with a long reach. High path speeds make them extremely productive. Their high repeatability enables precise handling and accurate positioning. MZ series robots with CFD controller can be operated with drag&bot.

The drag and bot GmbH was founded on 07.12.2017 by Martin Naumann, Daniel Seebauer, Pablo Quilez and Witalij Siebert. The startup is a spin-off of the Fraunhofer Institute for Production and Automation (IPA) in Stuttgart, where the team has been working on new, innovative ways of controlling robots. 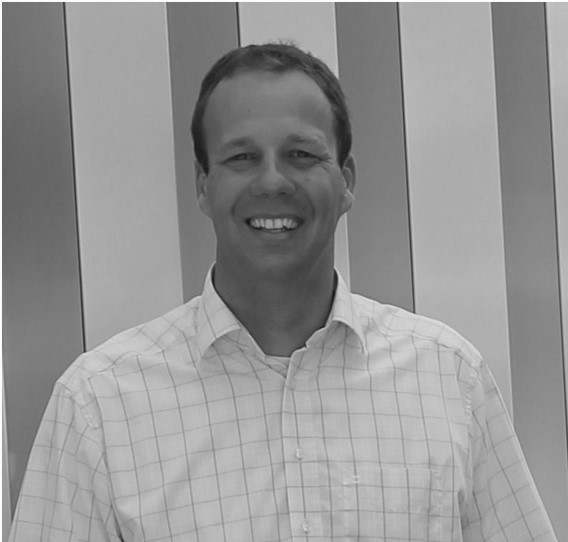 After studying robotics and automation technology, Martin first worked as group leader for the Fraunhofer IPA in Stuttgart for 13 years before he decided to found drag&bot.

As CEO, Martin is concentrating on keeping drag&bot on its growth path and aligning the company according to its strategic vision. 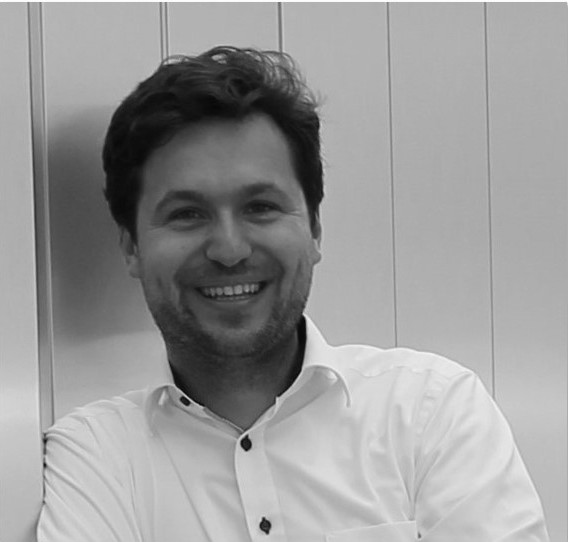 Daniel studied electrical engineering, industrial engineering and technology management at the Technical University of Munich and in the US. Before drag&bot, Daniel worked for various start-ups and on spin-offs from Siemens and BMW.

Responsible for business development, Daniel works closely with Martin on the strategic direction of drag&bot and manages the marketing and finance departments. 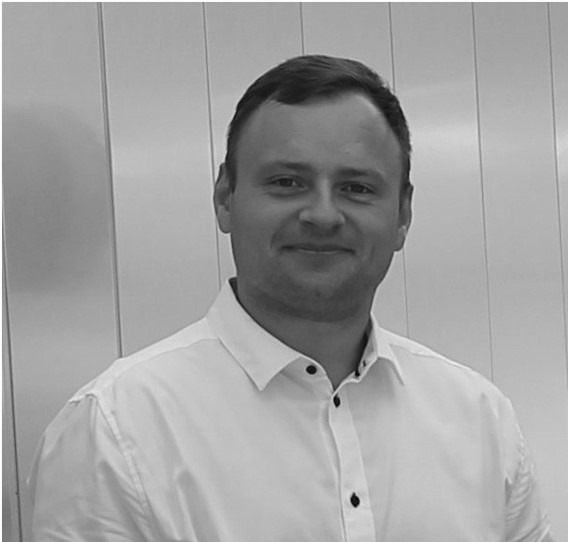 Before the foundation of drag&bot, Witalij was a research assistant at the IPA in Stuttgart. After writing his master thesis at drag and bot, Witalij joined the company as a co-founder.

As Product Manager, Witalij collects and prioritises all customer requirements and helps with the implementation. In particular, he also takes care of customer satisfaction and support. 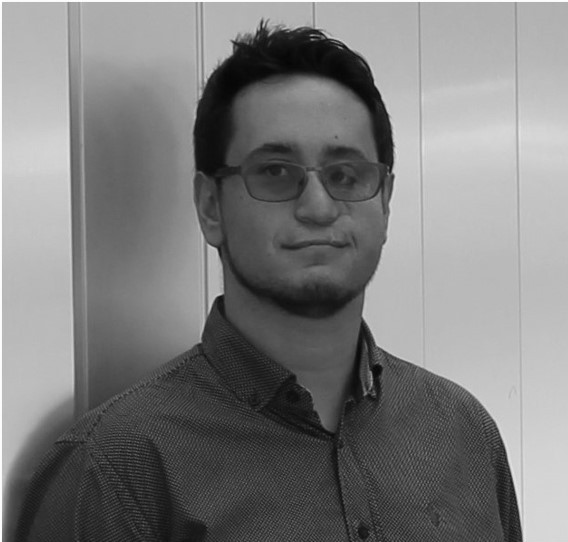 Born in Spain, Pablo studied computer engineering in Zaragoza. After his Erasmus stay in Braunschweig, he started as a software engineer in Hildesheim. From here Pablo moved to Fraunhofer IPA in 2013 and worked as a research assistant in Martin’s team.

In his role as CTO, Pablo develops the necessary IT concepts and is responsible for their implementation.